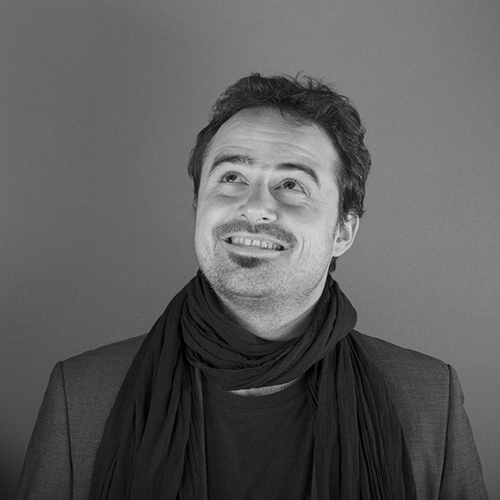 Listen to the soundtracks composed by Xavier Collet on G4F Records

He launches into a frenzied version of Johnny B. Goode and unleashes a “visionary” improvisation in front of a stunned audience…

Xavier Collet was 11 years old when he was first blown away by these scenes. He had been studying violin conscientiously from the age of seven, which now seemed very dull compared to the adrenaline rush exploding from the electric guitar! He decided there and then that he would be a guitar hero or nothing.

This episode marks the start of a long musical journey: rock and metal with his high school pals, a music degree from the Sorbonne, a prize for classical guitar from a conservatory, jazz with his university buddies, experimental electronic music, musical journeys to India, Turkey, Spain, the United States and Greece, a master’s degree in video game sound design from the ENJMIN school, an apprenticeship in many wooden instruments and printed circuits… This journey is characterized by an unquenchable thirst for discovery and sharing.

But it was in original music for film and video that the synthesis all Xavier’s talents and experience came to fruition, as he used all the elements from his musical journeys to create unique soundtracks. From the OST for the A Game of Thrones games to the 2010 film Mirages through dozens of notable short films and digital installations, Xavier’s creations have an originality that is always in the service of the work it is accompanying. In addition, his solid technical expertise and infectious enthusiasm make him a highly sought-after teacher.

You wish to collaborate with Xavier?

Listen to original soundtracks excerpts composed by Xavier Collet via the Bandcamp embed and the SoundCloud playlist below. Feel free to check the page dedicated to Xavier on the G4F Records website in order to listen to all his video games compositions.